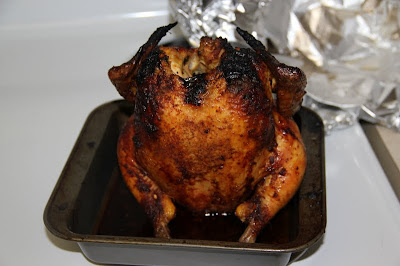 This is my favorite way to roast chicken.  It seems to be the only way I can manage to make a moist, flavorful roast chicken.  It works really well on the grill or in the oven.  My grill is too small for this, so I always make it in the oven and it work just fine.  Its great for tailgating, and it puts me in a summery mood any time I make it.
I really love that this is super simple to make.  It can be seasoned any way you like, but I typically use a basic poultry or barbecue rub.  Whats important is the process.  Because of that, this post will be formatted different that normal.
Full Post -->
Posted by Lindsey at 17:12 2 comments:

Email ThisBlogThis!Share to TwitterShare to FacebookShare to Pinterest
Labels: chicken

During beach vacations, I always want ice cream.  They just go together.  But I want something a little healthier, as I'm trying to get in better shape for the summer.  So here's a good substitute (thanks Meredith, for the idea!).  And I love that's its tangy, fat free, and super easy to make.

Email ThisBlogThis!Share to TwitterShare to FacebookShare to Pinterest
Labels: dessert

Cinco de Mayo was this past Thursday, and I had a final the following morning.  I was bummed.  I really like margaritas, and I LOVE Mexican/Tex-Mex/Spanish food.  So I decided that even if I couldn't go out and have a good time, I would at least make some Cinco de Mayo-inspired food.
I found a fajita recipe online that had a marinade very similar to the tequila lime chicken that I make occasionally.  On a side note, the thing I don't like about my tequila lime chicken is that it takes 12 hours to marinate, so I have to decide the night before that I am going to be making it.  The base recipe I have also serves 8 people, which is approximately 7 more than I am usually cooking for.  So I don't make this as much as I would like.
The recipe that inspired this meal was for a chicken and steak fajita, and was supposed to be served with a homemade salsa.  It also wasn't as spicy as I typically like.  Now, I expected this, since the recipe was written/posted by an Italian chef (ahem: Giada) on the food network, so we aren't talking about the queen of spicy food.  But that's an easy adjustment to make - I just added some extra heat to the marinade.
Full Post -->
Posted by Lindsey at 08:59 No comments:

Email ThisBlogThis!Share to TwitterShare to FacebookShare to Pinterest
Labels: chicken

For some reason, I've always been interested in ratatouille.  Maybe its because of the name... let's be honest, ratatouille is just fun to say!  Actually, it is because of the name.  Because as I think about it, I've never really known what ratatouille is.  I've always known it is a French veggie dish, but not much more than that.  I've learned that ratatouille is just a fancy name for roasted (or stewed or grilled) vegetable salad.  It always seems like the French like to keep around fancy names for really simple, commonplace dishes.  But I suppose if they invented the dish, they can call it whatever they want!

I was watching the Food Network this weekend (at 7am... thanks, Callie) and Rachael Ray was making ratatouille.  Granted, this was a beefed up Rachael Ray version of ratatouille.  This is ok sometimes, but it struck me as heavy, even though it was completely vegetarian.  And its PERFECT grilling weather out, I just don't feel like eating a rich, hearty stew.  So I got to looking into some more ratatouille recipes online, and I found one from Bobby Flay that looked absolutely delicious. 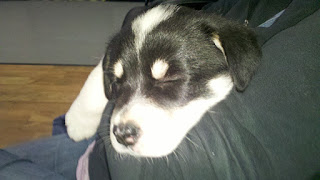 Sorry I fell off the face of the earth for the last month!  As many of you know, I have a new four-legged addition to my family, and she has demanded a whole lot of my time the last few weeks.  It is also the end of the semester, so I've been busy with my course work. 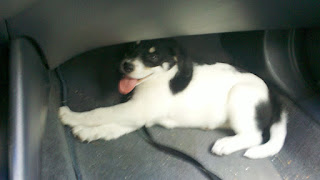 But I thought that if anyone is still checking this regularly (can't blame you if not... its been a little boring for a while), I'll throw up a simple recipe to keep you checking back.  No pictures or anything, since I didn't think about this until after I already ate dinner.  I had marinated grilled chicken breast, with a simple pasta salad.  Its simple and healthy, both of which have been meal goals of mine lately.  Simple because Callie doesn't allow me much cooking time, and I think the healthy part is obvious.